My Talk with Hansi Standteiner, the Climber and Pro Skier 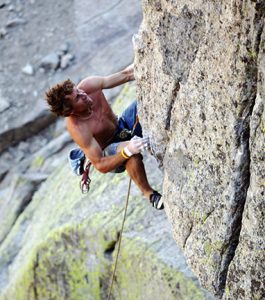 I recently had an opportunity to sit down with Hansi and chat a little bit about his life as a professional ski racer and avid climber. Some people know Hansi only for his racing history while climbers may know him only as a great climber. When I first met Hansi it was while I was out climbing on the summit. He made me laugh a lot, he's an easy guy to be around. I came to learn that one of the routes I was projecting out at Coldstream was actually one that he established. I didn’t know that Hansi also had such an impressive ski career too. After chatting with him I came to realize that, like myself, he just has an extreme passion for being in the mountains. Whether it is in the summer on the rock or in the winter strapped into a pair of skis, Hansi truly feels most at home in the mountains.

Where were you born? Was it Tahoe? If not, when did you move to Tahoe?

I was born in the Upper Peninsula of Michigan and lived there until I was 8 years old. We skied there at a ski area called Indianhead A few hundred feet of vertical. It was a good little ski area and it was cold - Canada cold. I started skiing there at age 2 like most kids who grow up in snow and near a ski area.

At what age and where did you first go climbing?

When I was about 10 I read some books about mountain climbing (Banner in the Sky was one). After that, I looked all around Squaw Valley where we lived to find rocks or any steep things to climb.

Were you hooked on skiing from day one? How about climbing?

When I was really young in Michigan it was too cold to be hooked on skiing; but, when I was about 5, I got the hang of it and I skied all day every day I could while my Mom and Dad ran the ski school.

How did you end up getting into racing? Are there any important influencers/mentors that helped in your skiing career?

There were some good racers in Indianhead who were coached by my Dad. Mike Porcerelli was one of them. I would stand so close to the slalom course when he was training to watch him that ice chunks coming off his skis would hit me in the face! Then skiing in Squaw Valley Greg Jones was a great US Ski Team racer and whenever he was home from the World Cup circuit I would watch him and follow him if I had a chance.

How long did you compete as a racer? Did you have any sponsors?

I skied on the US Ski Team from 1978 until 1985 and then pro raced from 1986 until 1992, naturally, I had sponsors. I was a World Cup ski racer. I skied on Rossignol skis and Nordica boots and Salomon bindings. 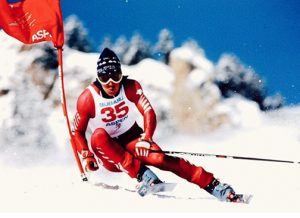 What was your best accomplishment/what are you most proud of in your skiing career?

I guess I would say winning FIS races and Europa Cup races in Europe and finishing in the top 20 in World Cups. In those days the US Ski Team was not very patient with their athletes so like a lot of us I went to the US Pro Tour and finished 5th overall my first year and was named Rookie of the Year.

Did you do any freeskiing besides just racing?

Freeskiing is a huge part of ski racing. Working on your technique and learning to ski the right way or goofing around and finding jumps or chutes to ski down. You basically ski 6 days a week from a very early age. That's a lot of great time on the hill! A lot of the ways I figured out how to ski better happened when I was skiing by myself or with a friend after regular training time.

For me, skiing and climbing go so well together because the climbing just gets better and better until the snow falls, and then it is time to ski. I know skiers at a more serious level spend more time training during the off-season though.

Were you skiing year-round or doing a lot of off-season training? When did you start to get really into climbing and how did it mix with skiing?

I was seasonally climbing in the summers ever since moving out to Tahoe. What started out as just scrambling around on rocks turned into more technical rock climbing with ropes. I feel like it helped with my skiing and it was good overall training. I was still really focused on skiing though so I would stop climbing at the end of September and then head to Europe for the season.

How did you start to get seriously into climbing? Did you just figure it out on your own or did you have any important mentors or friends?

It was quite different back then because there was no youtube or anything like that so you kind of had to figure things out on your own. We would pay more attention to the elite climbers in order to learn. Some of the climbing greats like Jim Bridwell and Kim Schmitz lived here and they would climb in the summer and ski patrol at Squaw. Max Jones and Mark Hudon were around establishing routes as well, and the Yosemite guys, like Ron Kauk, would come up and be climbing. I had a great group of friends to climb with. I remember Glen Poulsen getting gear from his older brother so we could go out on our own. 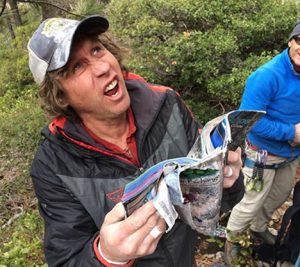 What was the gear like when you started to get into it? Where did you really learn and what type of climbing were you doing?

When we first got into it we were climbing with Swami belts and nuts. I remember I had one cam that I would save to only use for crux sections. You would buy your chalk at the drugstore and it was technically made only for gymnasts. We looked at what the pros were doing in magazines and tried to emulate them. I remember seeing Kauk climbing in his swami belt so we had the same thing. Then he showed up in Tahoe and was like “where are your leg loops!?”

How did you get into putting up your own routes? What was the first route you had an FA on? What was that process like?

I wouldn’t consider myself much of a route developer. I only put up a few like Birdy, Peter Panic, Unholy Feast, and some others. The first route I ever put up was Birdy and it was done ground up on hooks to place the bolts because that's how Bachar did it. Then, later on, I did some routes out at Coldstream but it was done differently by rap down bolting.

What is your favorite place to climb?

Yosemite because of its history and quality. Everything about it is just so powerful. When you do the route and learn about the history there is nothing like it. I have so many memories from there and just hanging with other climbers from all over the world. It's an amazing gathering of like-minded people sharing the same passion in one of the best settings possible.

What is your favorite route you have ever done (doesn't have to be one you put up)?

How do you feel about skiing today?

After I finished competing myself, I coached for the Squaw Valley ski team and Sugar bowl academy for many years. My daughter ended up becoming a good ski racer. She went on to race in Europe for FIS and won a race over there. It has been awesome to see her grow into an amazing skier. I still love skiing to this day and really enjoy getting out for a ski tour. I do feel that the industry is changing a lot of places that used to be just simple, “ski areas” into more of, “ski resorts.” There are more people going and a much bigger scene. It's not as simple as it used to be.

How do you feel about climbing today?

I think climbing is always the same but also much more specialized now. Today people are more focused on just individual aspects. Someone may just be a strict boulder, sport climber, trad climber, or gym climber while back then I felt that we were all just out to climb mountains. Nothing wrong with that but it's just different. I love bouldering and am extremely impressed by it but could never go to Yosemite and only boulder. One of the things I am really happy about is that I was just a good enough climber to climb with some of the greats. I also love the camaraderie you get from climbing with your friends.