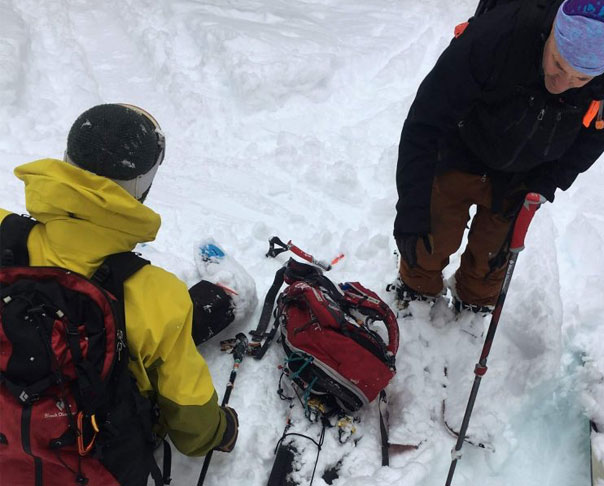 ‘I knew we had it handled’: Truckee skier makes it out of backcountry with broken leg.

Article in the Sierra Sun | by Justin Scacco

It was a near ideal March day in the Sierra backcountry, one similar to so many that longtime local skier Matt Hedley had experienced.

Several feet of fresh snow lay on the mountains from one of the first significant storms of 2020, and Hedley, along with a pair of friends, headed toward a favorite spot on Tahoe’s West Shore for a day of backcountry skiing.

After completing their first lap near Jake’s Peak on the morning of March 18, the trio set out to repeat the route. Upon reaching the top of Hidden Peak, they began making turns down the mountain in the thigh-high powder, which is when misfortune struck, turning a day of skiing into a rescue effort.

“Right at the start of the run, five turns in, right as it rolls into steep terrain, I skied over a rock you couldn’t see at all,” said Hedley, 42. “It wasn’t like I clipped a little shark fin or something, it was a full on boulder that I skied over the top of that just had inches of snow on it. I just kind of skated across it, and I was in a turn, so as a I skated across it, it changed my momentum.”

As Hedley lost his balance, slowly twisting and falling downhill, his right leg got stuck in the snow. “There was nothing I could do,” he said. “It was total slow motion. I could feel it, like ‘that hurts, that’s turning a lot.’ It felt like it took 10 seconds. I could feel it stretching to its limit and then breaking, and then pain.”

Hedley came to a stop with his head facing downhill, stuck in the snow, leg twisted, and though he didn’t yet know it, a pair of fractures in his lower fibula. Laying in the snow, Hedley began yelling for his two friends, which “was easy to do, because I was in a lot of pain.” 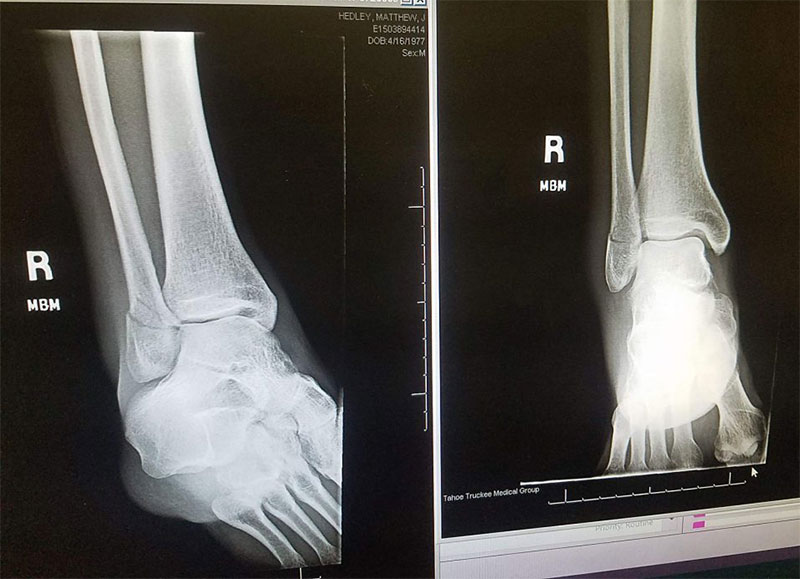 One of his companions was able to help unclip Hedley’s binding, but the trio was still sitting at around 9,000 feet and a couple of miles from where they parked their car. Hedley estimated it would normally take about 20 minutes to ski down from the location, but as an experienced backcountry skier, he knew it would take several hours to get down in the deep powder.

At first he clipped his foot back into his binding to attempt to ski down on two legs, but after about 200 feet it became clear that placing pressure on his right leg wouldn’t be an option. And so, Hedley made the decision to remove the ski and attempt to make it down the peak by skiing on one leg.

At first he was able to cover a significant amount of ground, but as fatigue set in, Hedley took the first of several painful spills, shifting and putting pressure on his broken lower leg with each fall.

“I just wanted to make as much time as quickly as possible,” said Hedley on the decision to ski down on one leg. “We probably made it 1,000 feet doing that. It was worth it in my mind to make the progress. It was all about pain versus progress at that point.”

After hours of work the group made it down to a flat section on the skin track, where they fashioned a sled by lashing a ski pole to Hedley’s skis, and then used a backpack for a seat.

“None of us had actually done it,” said Hedley on making the sled. “But we all had a rudimentary idea of how to do it. In hindsight, that’s something everyone should practice doing in a controlled environment.”

One of members of the group went ahead to scout the best route to get down, where he ran into another skier, who offered to help pull the sled. Using two skiers in the front and one in the back to slow the sled on downhill sections, the three were eventually able to get Hedley back to his car.

“We passed at least half a dozen other parties,” said Hedley. “Everyone who was out there was super helpful, willing to help us. A couple of people did help us at several points when it made sense for the rescue. The overall vibe from everyone was incredibly supportive. That was one thing that was pretty cool about it. It’s kind of a community feeling.”

In total, nearly five hours had elapsed since suffering the injury to making it back to his car.

“I had great partners,” said Hedley on the rescue. “We had more supplies than we needed. Enough gear that we could make the recovery happen, and enough confidence in our own abilities that we could do it.” 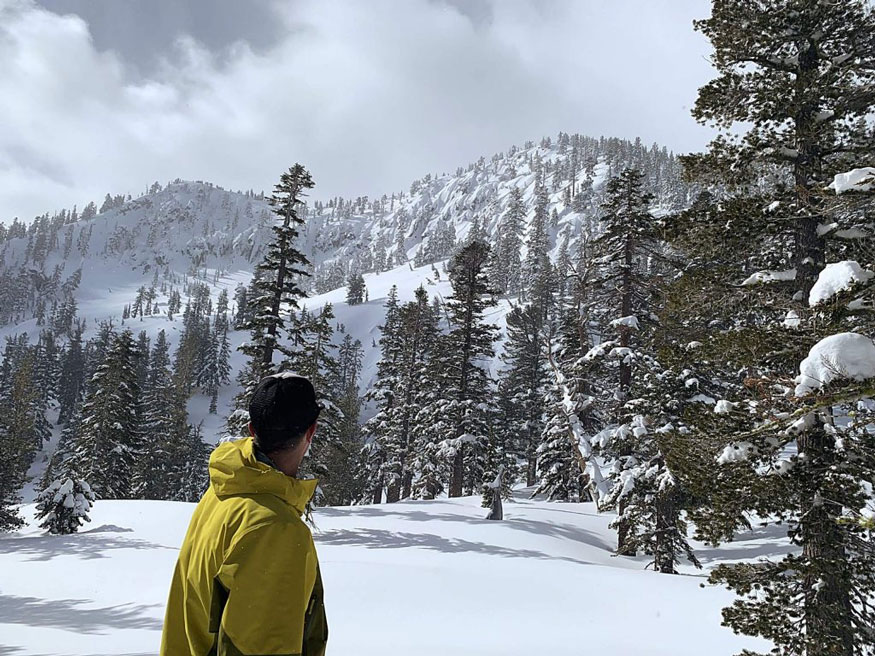 With ski resorts in the area closed due to COVID-19, many skiers both experienced and inexperienced are being drawn to the backcountry.

After resorts closed, Hedley, who works at Granite Chief Ski & Mountain Shop, said the shop had several calls from people who were looking for backcountry gear, though they “didn’t know anything about the backcountry.”

Hedley said he’s had between 150 and 200 days of backcountry skiing under his belt, which proved key in making it back to his car with a broken leg.

Hedley credited his experience, and his partners, along with being prepared with proper gear like radios, extra clothing, and headlamps, in getting out without having to call for search and rescue.

“You need to be prepared for the event of someone getting injured to the point to where you’re not getting out in a timely manner. You need to carry everything in your kit that will help if you don’t come back in the amount of time you think you are going to. I was never worried because we had all of that stuff,” he said.

“Bottom line is, if you’re not willing to drag yourself out by hook or by crook, by whatever means necessary, you shouldn’t be out there. If you’re going to hurt yourself and the only way you’re going to get home is to call someone, that’s a really bad outlook.”

Hedley added that while in this instance he didn’t consider calling for search and rescue, if the situation had been more dire he wouldn’t have hesitated in asking for help.

“I figured it was our deal, our job to get back to the car,” he added. “I knew we had it handled. I was never worried. I’ve been out and thought about what I’d do in a situation like this enough — you know it’s going to happen at some point, it’s always kind of in the back of your mind.”

For those inexperienced in backcountry skiing, Hedley recommends always finding experienced and knowledgeable partners to go with and learn from.

“Unless you are super experienced and super confident in your abilities and with where you are and what’s going on, you always need to be with people who are experienced and know the area,” he said. “That’s Number 1.”